WHAT is the UNIVERSAL answer to any problem in the FUTURE?

I would start to answer from my empirical point of view – I don’t have a clue how am I going to tackle the problem… But I know one thing: I have grown up to be a Homo sapiens. I am an adaptive self-learning active system. I am the crown of the evolution. I am the best answer to any question. I have put machines in space, stepped on other planets, invented tiny robots to heal myself and I am building a quantum computer. But that is not all. That is merely the beginning. Now I am changing the natural essence of the evolution. I am taking control of my destiny. I can start to really engineer my future.

I am a Homo Evolutis.

And Yes! Believe me! I will find a way to solve any problem.

Because this is the place to be and these are the times to live. It all depends on me now. The dark ages have passed, the future is bright.

Longevity as a burden? I think not!

Time to reverse the course to welfare state, and move on finally to Laissez-faire.

“Longevity risk, the chance that people will live longer than expected, is potentially very expensive. Never mind the dramatic impact of a cure for cancer: adding an extra year to the average lifespan increases the world’s pension bill by 4%, or around $1 trillion, according to the IMF.” 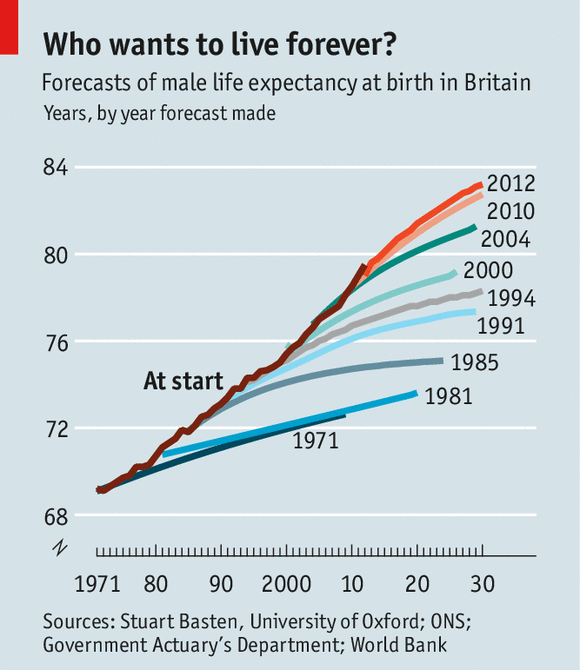 There are two good developments in the article to go along the otherwise shortsighted, narrow-minded text:

1) There is empirical prove of significant extension of life expectancy – that includes both the actual lifespan period (which has risen more than 15% over the last 33 years) and the people’s perception of longevity exponent (the slope of the expected values has gradually become more than 4 times steeper for the same period).

2) There is a need and as a response – a visible change in the thinking among financial minds. First (speaking about the need for change) the annuities and other ill-fated brainchildren of the Enlightenment have done their due and are expandable. The change will bring us a new set of financial instruments engineered for the exponential (as opposed to linear) finance.

This is a cool reminder of how cool the Homo Sapience is and just consider that the dialog never mentiones the intelligence. Now really extrapolate from the badass humans to The Noo-posthumans, and you have the ultimate space conquirer.

This is a short list of great technological achievements. For some unknown reason they are mentioned in a negative context but they do not deserve such mis-judjement.

My (not so) lucid dream last night

Hypothetical scenario 1 (Actually a featured movie fiction scenario): a group of mutated and clinically immortal beings live in communities called covens. They take turns to sleep for 100 years so that they could regenerate and rest their bodies. So they have a sort of mandate governance. One major problem – how to meaningfully transfer all the new information to the just awaken person. This is an especially challenging task lately since hundred years tend to pack ever more significant news. So they need to implement some sort of rapid learning.

Hypothetical scenario 2 (somewhat relaxed assumptions of scenario 1): We find a way to resurrect humans (as physical entities or at least as informational entities). An important major problem – how to meaningfully transfer all the new information to the just resurrected person so that he/she is a contributing member of society from now on. This is an especially challenging task if you consider the possibility of resurrecting informational entities died centuries ago. So we need to implement some sort of rapid learning.

Hypothetical scenario 3 (more and more realistic with each passing day): We have to at least try to include in a transhumanistic society everyone that has been left future shocked by the constant change. The most major problem – how to meaningfully transfer all the new information to the future shocked person so that he/she is a contributing member of society from now on. This is an especially challenging task if you consider the reality of ever so quick rate of leveling up the minimum requirement skills and knowledge just to participate in live. We need to implement some sort of rapid learning. 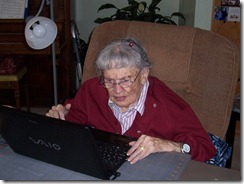 Richard Dawkins on the four theories of origin of life

It is about time to abandon the stupid habit of communication by mouth (using the silly mechanics and sound waves) when our thoughts are electro-chemical in nature ….

a) The Visionary – Kevin Warwick…

b) Some previous works (far from exhaustive)…

Monkeys Use Brain Interface to Move and Feel Virtual Objects… d) Just around the corner…

The glasses are hopefully first of many mass production wearable computing devices, that will make the leap to Web 3.0 and beyond. HD projector lenses  to come….

“The HBP will build new platforms for “neuromorphic computing” and “neurorobotics”, allowing researchers to develop new computing systems and robots based on the architecture and circuitry of the brain,” EFPL scientists said in a statement this week.

The Swiss project likened the research to the Large Hadron’s Collider’s exploration of the subatomic world, describing the Human Brain project as a, “CERN for the brain.”

“However because this project is breaking new ground there is a need for members of the project to consider their responsibilities.”

The war on digital information liberation is reaping its first victims

Aaron Swartz – the co-creator of solid web services as RSS and Reddit and notorious liberator of information – was found death this morning in his place in an apparent suicide. What has pushed one of the top 5 young web entrepreneurs and geniuses to such drastic deed, you may wonder? Well, it has to do with the pending 35-years in jail felony charges, pressed on him for his acts of web activism. Aaron has done nothing short of heroism by persuading JSTOR – a long-time cold-hearted service – to start offering some of its contents free of charge. The policy was prompted by the massive liberation act by Aaron of some of its content. 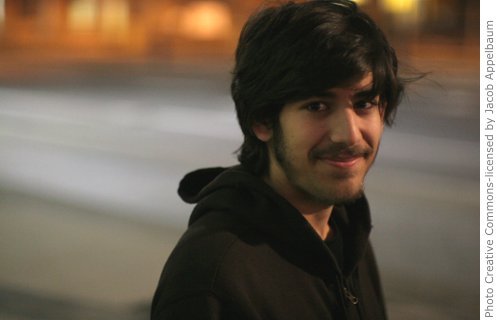 In case you did not noticed it – we are already in the midst of the first full-fledged, all-out war on digital information liberation. The war used to be of cold nature with the occasional Anonymous burst or flash mob. The real battle started with the battle against ACTA, PIPA, SOPA but it has brewed for the past two decades. It moved on with Jailing people for expressing their natural desire (and basic right) for more information. Sites such as Library.Nu and Megaupload were closed down (not by police force – since no police force has jurisdiction in information domain, but by political and corporate hand twisting of the hosting nations from the physical domain). And now its on! Its upon us and it is time to stand our ground (figuratively). It is time to state that the digital rights nomenclature – the very foundations of Old Capitalism – are the ones to take it appart. It is time to state a loud “Down with copy rights!” and it is time to create the new Capitalism 2.0 from the ashes of the old un-adaptive corporate world.

The new times have brought up new type of heroes – it is no longer the case that the important persons (the Franz Ferdinands of the war) are powerful in the physical domain. No, the heroes of the war are the non-stopping soldiers in the information domain.

R.I.P Aaron, You Will Be Avanenged!

P.S. UPDATE: Here is one sad note written over 10 years ago by Aaron himself. It not only settles his final will (forever living in the informational domain) but also shows the type of person he was.

P.P.P.S. UPDATE: There is a Tumblr page for remembrance of Aaron…